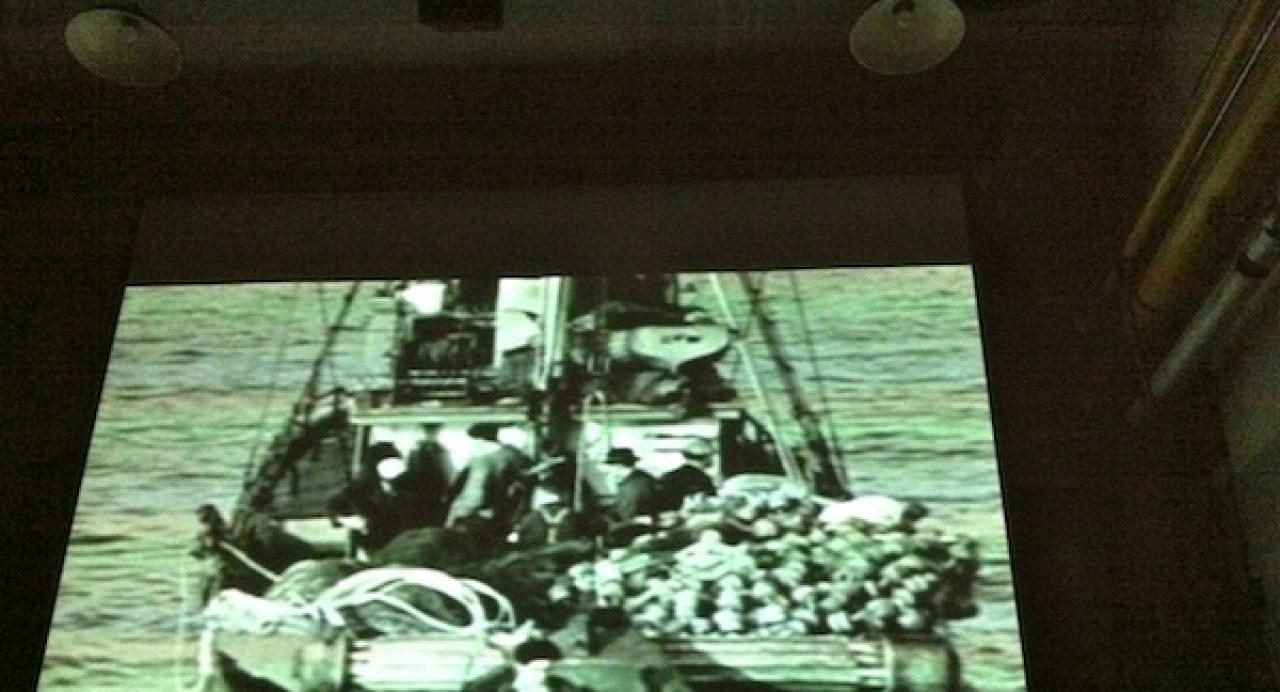 If you thought canned fish was boring, you’ll think that no more after a visit to the Gulf of Georgia Cannery National Historic Site. I’m serious, this place makes fishing and factories excitingly eerie and the past so seemingly present. And that’s probably what gives it a 4.5 star rating on Trip Advisor. The thing that makes this museum so cool is that it wasn’t always a museum. It was once a real, honest to goodness salmon cannery and, back in 1894 when it was built, was the “largest building of its kind and the leading producer of canned salmon in British Columbia.” They even called it a “Monster Cannery” at one point. Today it still stands in Canada’s largest commercial fishing port in Steveston Village, Richmond, B.C. and is featured on a Trip Advisor list titled, “Vancouver off the beaten path.” Though it has been refurbished, parts of its original building material are still intact.

Today it is decorated as a museum and even has neat lighting effects to set the mood for your tour. Making you feel like you’re part of the past

I wouldn’t call the Cannery an exhibit – it’s too real for that. I’d rather think of it as a time travel machine. Hey, it sounds cheesy but what can I say, there’s no better way to describe it.

When you first start your tour, your guide will ask you to please punch in. It is time to start the working day, and all cannery workers have to mark the start of their shift on their personal time cards – including you! If that’s not enough to make you feel like it’s time to buckle up and pay attention, I don’t know what is! It’s hard to understand the magnitude of what happened in this building until you experience it first hand. You’ll see the antique, once-fully-functional machinery up close, now rusted and retired, but at one time capable of, and known for cutting off human body parts. You feel the temperature of the outdoors and see gory displays of bloody fish (made of plastic, don’t worry) on washing stations that spat out freezing cold water in the dead of winter. You also get to try picking up (fake) fish with a hook on a long stick and feel the pressures of having to do that menial task at heightened speeds 12 hours a day to keep up with factory demands in the early 20th Century, before people thought much about worker safety or health standards. Most of us in today’s generation probably wouldn’t have survived working in that factory, and most of us would have been underage, under represented or utterly desperate for wages if we had taken a job there (or followed our parents to work every day as toddlers because no one could afford a babysitter).

As a museum, the Cannery offers tours on the hour by well-educated staff 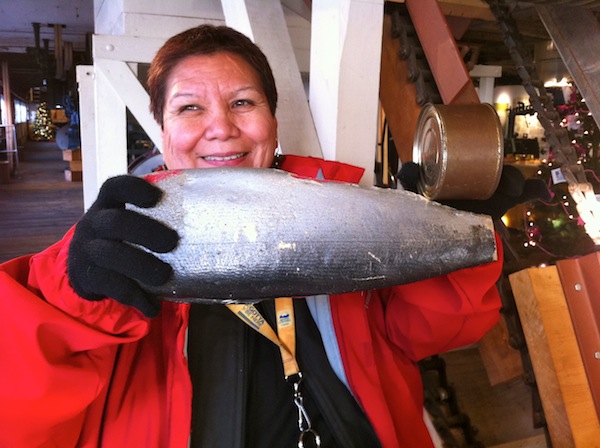 After you punch in, they start by showing you a Skiff, which is a small fishing boat that was used by professional fishermen before they had engines. If you can imagine, the boat was smaller than a typical sized bedroom, and would contain food, coffee, a stove, fishing supplies, plus the fishermen and the fish! They would stay out on freezing cold water for a week at a time with no toilet. That’s right, it was sleeping under the stars in isolation and hopefully no one got sea sick (or had annoying co-workers). So life was hard for a fisherman, and when large metal fishing vessels arrived to catch larger heaps of salmon and herring in B.C. fish-abundant waters, it was a hard life for cannery workers too. 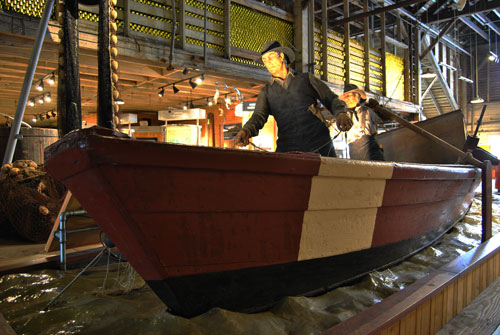 Real life, and real dangers existed at the Cannery

The Gulf of Georgia Cannery Society, which now runs the museum after community members lobbied the government to preserve the building, does a great job of helping you imagine the life of a cannery worker with clever metal displays that show outlines of workers where they would have been doing their job. 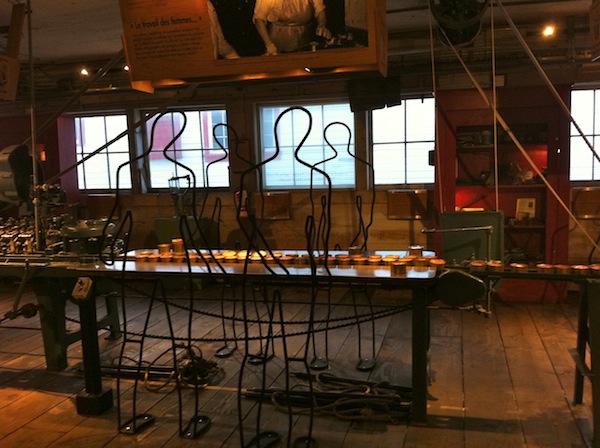 They also do not fail to remind you of the dangers of working in the factory with a model of a hand that had its finger cut off. Story has it a worker once lost their finger in one of the cans on the line, but the finger was never found inside the factory. So that means someone probably had their tuna sandwich appetite ruined shortly after the incident! 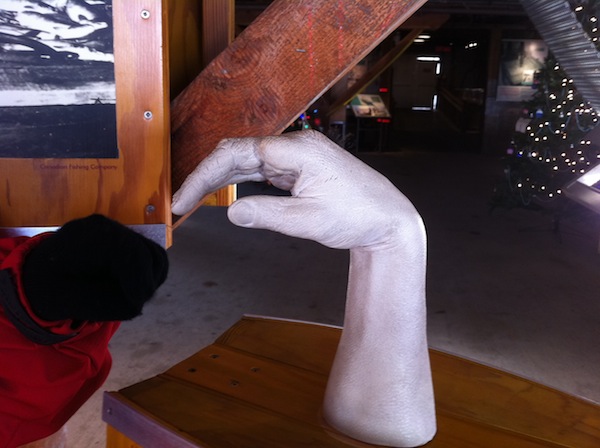 Workers were also not that nice to each other. Playing tricks on the newbies, they’d tell them to wash their work clothes in lye, only to have them ruined. Why was there lye in the factory for workers to play with? Sigh….the 1900s… It may also interest you to know that the building had virtually no fire safety. According to the Gulf of Georgia Cannery’s website,

“In 1923, the Cannery was considered in a ‘good’ location and valued at $52 000 (machinery included). However, the Cannery lacked fire extinguishers, hydrants, hoses, barrels, pails – basically any fire precautionary fire device! The Cannery’s fire record was marked as ‘good’, despite it boasting 41, 500 square feet of wood pilings, wood floors, and a shingle roof! Some may say it’s a miracle that the Cannery’s buildings did not burn down, given that its structure was an extreme fire hazard – not to mention the countless fires in Steveston during the 1900s!”

There is a large section of the Cannery that is devoted to showing a real past herring reduction plant where very large machinery and tools still stand. You’ll feel quite small among these tall metal structures in huge dark rooms. If you’re in there alone, the place is a little too quiet until you hear a big bang or rumble because something has been turned on in the building. It definitely makes you want to run out quickly, but not to worry, it’s not operational anymore! Learning that someone had to work there, doing disgusting jobs when it stank like fish, really puts things into perspective for you – maybe a ‘boring’ office job ain’t so bad after all! The cozy video at the end

While you could watch the museum’s 20 minute movie feature at the beginning of your tour, the museum staff may recommend that if you go in winter, to watch it at the end because it’s warmer in there 🙂 While all museum movies are cheesy, and this one is no different, it does delve into a lot of detail about fishing history, starting from when Native Indians used spears to fish in rivers. It also explains the discovery of fish in B.C. by Europeans, and growing up here you’d know that fish played a huge part in our economic and societal past. For a tourist from out of town, I’d definitely stick around to watch the movie and learn a little something about what makes B.C.’s history so special. 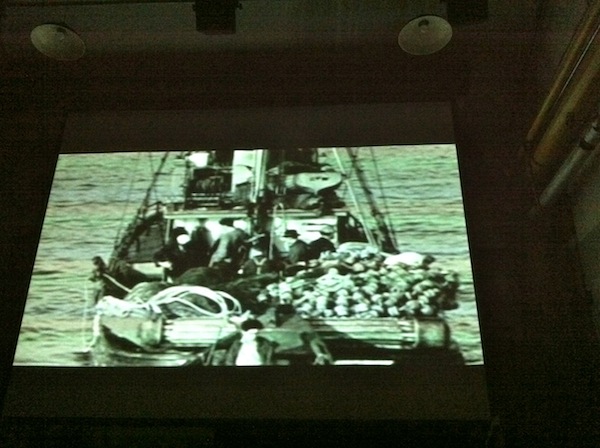 A tip for making the trip

While the entrance fee to the Cannery is not expensive at all, at just $7.80 for an adult and $3.90 for a child (including taxes, at time of writing), the museum does offer a discount to groups of 10 or more.

Since they offer guided tours and educational programs for kids of different ages, I’d recommend going with a school group or, if you are a homeschooling parent, team up with other homeschoolers to make a worthwhile educational experience out of your day, letting their professionals do all the teaching for you! Use Kijiji’s “activities and groups” classifieds to find other families to join you! The more the merrier! Of course, do call in advance to make a reservation!

There are things to see and do after visiting the Cannery!

The Gulf of Georgia Cannery is situated between a very popular fishing village in Richmond and also a beautiful park called Garry Point. There are ice cream shops and fish and chips joints in the village that all the locals know (like Pajos). If you want a nicer dining experience there are also myriads of restaurants in the area. If you just want to cozy up in winter after visiting the cold museum, there are coffee shops nearby too, including Starbucks and Blenz, a ‘native’ Vancouver coffee chain.

But if you love the outdoors, I have to say that interestingly, Garry Point is called a “kite field” on Google Maps :). Growing up visiting Garry Point, I can testify that it is a great place to try to fly your kite. I love it for its beach shore beauty, next to fishing boats, and its long trail marking the south end of the popular Richmond Dyke. Photo credits: Photos are by Joyce Grace unless otherwise noted.